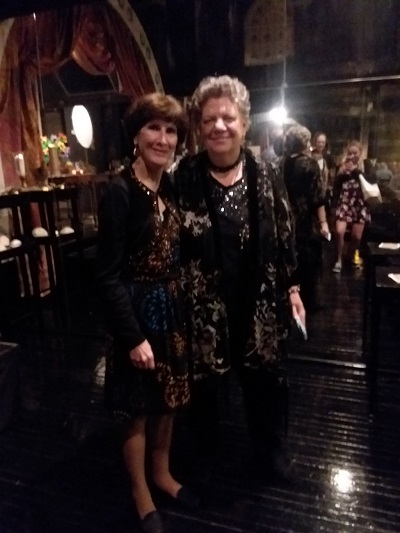 The path of spiritual growth is a path of lifelong learning. ~ M. Scott Peck

Happy Halloween, everyone. On October 3rd, my cousin Meg Heisse and I witnessed a little hocus-pocus when we attended An Evening of Victorian Magic at Evergreen Mansion and Library, which is a Johns Hopkins University Museum. Since my cousin is a member, we were able to attend a pre-performance reception held in the Asian red room among Chinese and Japanese collectibles. The bartenders stirred up Victorian libations and we saw up close magic tricks by David London. Mind reader indeed, out of a 52 card deck, the magician asked me to select one card and show it to others.  No slight of hand involved, through telepathic transmission he correctly identified the card I had picked. But that was just the start of the delightful evening. The magician had many more magic tricks up his sleeve once the show started and he came to the stage.

There was no need to build a stage for the evening because there is already a Victorian era theatre in the Evergreen Museum. And although there were no upper level seats for celestials to sit, as in many Victorian theatres, we were told apparitions are in or about the rooms of the mansion. The theatre, painted by Russian Artist Leon Bakst, was used regularly to entertain the three Garrett boys, who at one time lived there. The event was further enhanced by period clothed people who came enthused about learning more about Victorian magic.

The Evergreen Museum and Library was built in 1850 and became home to railroad magnate, John Garrett and his family. He was President of Baltimore and Ohio “B & O” Railroad. A little over one hundred years later, in 1952, the Italianate home from the Guilded Era was donated to Johns Hopkins University and it is now on the National Register of Historic Places.

Also in the mansion is a 30,000  volume library with much of which is English Renaissance literature. Paintings by Picasso, Degas, Modigliani and stained glass by Tiffany, a 23 karat gold plated bathroom all are housed in the structure. In the Asian red room I spied several pieces of Chinoiserie furniture.

Today, I will share a treat of a few pictures of our evening at Evergreen Museum and Library. Look carefully you might see things that fool the eye!

To those of you who like Halloween, enjoy it! Tonight, I’ll be content to remember the early All Saints Eve I spent with my dear cousin at Evergreen. I do look forward to returning to the historic pla.ce which is part of the Sheridan Libraries of Johns Hopkins to take in the full tour, including the library.

My heart-felt thanks go out to Meg Heisse for inviting me to experience this fun evening with her so I could learn more about life within the Sheridan Libraries of Johns Hopkins.

A Few Miles in My Shoes

"Where have you been? I haven't seen you around so much," someone said to me…

"A good example is the best sermon." ~ Unknown On a rainy day last week…

When angels visit us, we do not hear the rustle of wings, nor feel the…