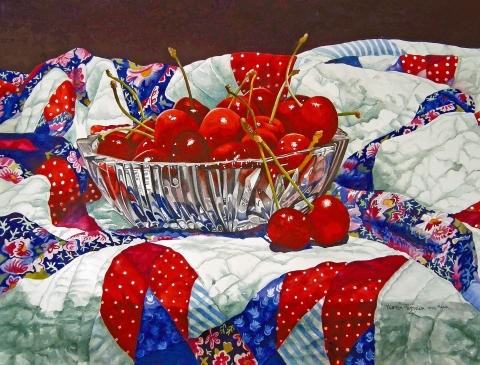 “It strikes my heart strings that the county fair, which is prevalent at the end of summer in many rural communities, is one of the last bastions of a simple life.” ~ Sue Batton Leonard

I was ushering as a volunteer at a Take 6 Concert at Strings Music Festival a week or so ago, when Jackie, a fellow Delectable Quilters Guild member approached me.

She said something like “You are going to enter something into the fiber arts category of the Routt County Fair this year, aren’t you?”

“Oh, come on! You must have something!” She looked at me like it was a travesty that I hadn’t considered entering a handmade ware.

“Well,”  I said, “all of my stitched hearts, except two, were sold at Arts in the Parks and I really haven’t sewn any more recently. I’ve been kind of busy with other things.”

Jackie persistently went on, “I’ll be taking some of the quilt guild  members’ wares over to the fair on Wednesday. The judging will be on Thursday,” she added in.

“Oh, Jackie, really, anything at my level of sewing does not stand up in competition.” I was, after all, talking to a quilter extraordinare who has won many, many Grand Champion blue ribbons at quilting contests well beyond the local level.

“It’s not about that,” she said. “The fair is all about tradition! And if you’ve never entered before, you must!” She said insistently. “How about a cherry pie? Bring me something.”

Image above: “Life is Just a Bowl of Cherries” by Therese Fergusion of Brevard  Watercolor Society.

I nearly choked on that pity suggestion because I can’t make a decent pie crust to save my life.

When I got home that evening I remembered a little creation I had so enjoyed making when my son gave me a new Brother sewing machine last Christmas. Using fabric from one of Sandy Gervais’ Collections, I’d gone to work creating and had a wonderful time. The quilt I made is a beginner’s attempt at something a bit non-traditional. Embellishments of several mediums have been added.

The next day Jackie & I communicated and I said I had something to enter after all.

Do return to Sow the Heart. I’ll tell you about my heart warming visit to Jackie’s studio to drop off my entry!

“When people go to work, they shouldn’t have to leave their hearts at home.”— Betty…

Whims of the Heart

Quilted Image (above) by Carol Ann Waugh, award-winning fiber artist Have you ever heard the…

"Children touch all of our lives. We all have the opportunity to sow seeds…