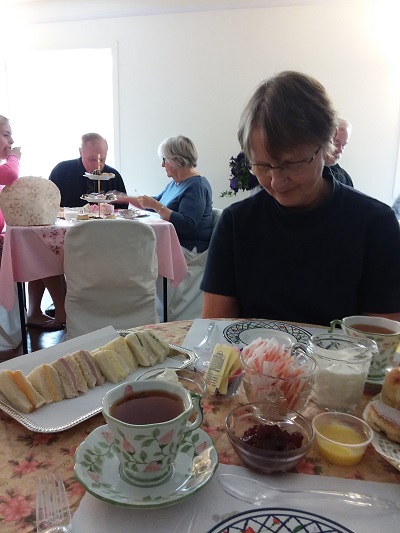 “A good laugh heals a lot of hurts.” ~ Madeleine L’Engle

We arrived at the British Garden Party and Fête just in time for some light-hearted humor. Professor Horn’s Punch and Judy Show at St. Stephen’s Anglican Church was ready to begin. Listening to laughter of the children enjoying the antics of the puppets started the day sunny side up!

After many years of geographical separation, I have reconnected with my friend and childhood next-door neighbor, Margy so we went to the British Garden Party together. It’s as if not a day has come between us. We picked up with one another so easily after four decades. A comforting feeling and she’s a person I’d always enjoyed having a good laugh with – she likes to giggle!

We browsed and admired the angel wing begonias and other flowering plants, the jumble table, saw the ribboned Maypole waiting for little boys and girls to form a ring around it do their thing on the parish lawn. Then there was the Bake Stall, the Ploughman Lunches, pasties and snorkers. As we made the rounds we said “Good Day” to two fine gents at the Barley Mow Pub while considering a Smithicks or Harp Lager.

But instead we decided to hold out and go to the Vicarage Tea Room for an afternoon British Tea. After all, neither of us had ever stepped inside an Anglican Church and it gave us a good excuse to take a peek.

What awaited us inside was tasty and fulfilling – tea sandwiches, scones with clotted cream, jam and lemon curd. The petit fours, chocolate-dipped strawberries and cookies were piled high, beautifully displayed on a three tier stand. Just when we had eaten all we could, a kind server came over and advised it was time for a piece of cake. “Oh my!” we both responded simultaneously. Chocolate, Coconut, Jam Roll, Orange Sponge and Carrot were our choices. If our tea had included only one piece of cake, it would have been enough it was cut so generously.

While we were inside taking tea, all kinds of fun and games were outside for the children including jokes from the jester, pelting of water on those locked in the pillory, a glorious Grandmother and Knobbly Knees contest.

As we strolled away from the parish grounds we listened to the bagpipes.  The take-away for me was not only a teabag cookie made from Earl Grey Tea but also a decision to attend more church fairs and events in different communities with Marge. She’s an artist who makes stained glass creations. We have common feelings about the role faith plays in our lives. Marge, I am very grateful for your years of loyal friendship.

Scroll down to the Post Script (P.S.) at the bottom of the page

When the last minute invitation to Prince Harry & Meghan Markles wedding arrives from the Royal Palace, we’ll be all set. Marge and I have our Fascinator Hats all picked out. I’ll go with the pink and Marge said “her druthers lean toward the navy.”

Don’t believe me?  One Sunday after the Royal Wedding is over, perhaps you’ll see me all decked out in a hat at another faith place. I like visiting all kinds of cornerstones of community which build bridges of unity. It fills me with contentment.

What’s in a Notion?

"Preconceived notions are the locks on the door to wisdom" ~ Mary Browne One day,…

“It is easier to build strong children than to repair broken adults.” ~ Frederick Douglas…

I was feeling dry, parched. There were some loose ends in the family history story…