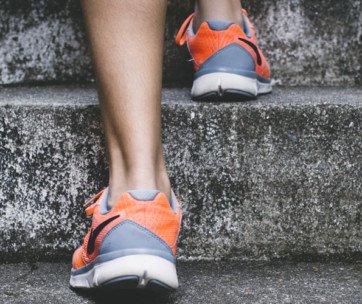 “Courage is the power to let go of the familiar.”– Raymond Lindquist

“This is ridiculous,” I said to myself, as I tossed my old walking shoes into the trash. The shoes should have been discarded a long time ago. There was no tread left and holes in the toes! I tried unsuccessfully once before to give up my well-worn shoes that I’d walked approximately 5,000 miles in. The shoes had accompanied me for about six years of two to three mile walks daily throughout the coldest, darkest days and in the most beautiful light-filled ones, too. Even after I’d gotten a new pair of walking shoes, I still resorted to putting on my old worn sneakers except when walking to church on Sundays. Then I’d don my more respectable walking shoes.

So, what finally convinced me to give up my old walking companions? An upcoming move to a new community! There is no need to tote the shoes along with all the dirt they’ve slugged through when I had a new pair of sport scoots. Many other things I’d no longer had use for went in the trash that day too.

The advantages of moving is the opportunity to edit one’s life and one’s belongings. If you have ever made a major move in your life, for a while it feels as if one is walking in someone else’s shoes. After an adjustment period, a new place grows comfy which allows for new perspectives and forward movement.

It’s a funny thing, they say as we get older we get more stuck in our ways. Except for the loyalty I’ve had far too long for my old shoes, I’ve grown more comfortable with change and realize progress can not be made with out veering off the well beaten path.  If you are challenged by the idea of major change, here is an excellent article about life’s transitions.

"Time spent among the trees is time never wasted." ~ Unknown Last week, I was…

It is in the heart that the values lie. ~Mark Twain A few weekends ago…

Crafting is a heart-centered activity.