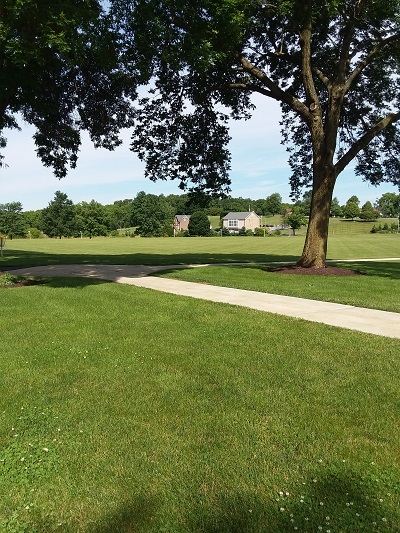 “Be who you are and be that well.” ~ St. Francis of Assisi

I’d decided the week of the two writers conferences, I’d let my spirit lead me to what felt right and good. I had an urge to stay in the Lehigh Valley close to what was my son’s home for four years, DeSales University,  even though it would mean a commute each day to Drew University Theological School.  I knew I’d have a free day between the two writers conferences and I wanted to walk the familiar grounds of the serenely green campus.

I was eager to see the construction projects which had occurred since Marc’s graduation. I’d heard about the changes from my son when he discovered them on Easter weekend when he returned to the campus with his new wife to show her where he went to college.

Besides the impressive changes to the physical plant of a few new buildings and a reconfigured sports complex, I came across a new sculpture of Jesus the Teacher centrally located on the campus. Massive in scope and in good keeping of the others, here is a photo of  the sculpture which came before my eyes as I strolled across the beautifully groomed lawns.

Over the four years my son was at Desales University, I’d become acquainted with St. Francis De Sales, the patron saint of writers and journalists.  A likeness of his image is set in stone on campus.

I encountered a statue St. Jane Frances de Chantel which I hadn’t noticed previously. I am not sure if it is new on campus but I have since enjoyed learning more about this inspiring woman.

The last figure sculpture, Lady of Our Deliverance, is set up on a grassy knoll in a plaza for solitude and reflection overlooking the entire campus. The university began in the middle of acres of cornfields and has continued to grow and gain recognition. In 2019 DeSales University was named as a top college in the U.S. News and World Report.

I love this prayer. When I wrote my award-winning memoir, Gift of a Lifetime: Finding Fulfilling Things in the Unexpected  I believe God had a hand my work and has ever since.

As I drove away from the college campus, I thought how I was looking forward to the next two days at Publishing in Color. Come on back to SowtheHeart: One Story at a Time.  In three days, I’ll let you know more about the second conference.

Today, I'm going to take you on a field trip not through the images posted…

“Courage is the power to let go of the familiar.”– Raymond Lindquist "This is ridiculous,"…