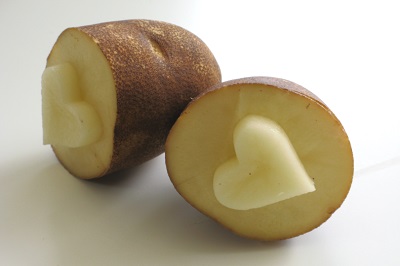 “…carry the spirit of a child into old age, which means never losing your enthusiasm.” ~ Aldous Huxley

On a Sunday morning two weeks ago the weather was dreary. The day before had been a stunner. What’s happened? I thought. I need a pick-me-up. Then I remembered the LIFT Pilot program being launched at Mays Chapel United Methodist Church. I decided I’d join in.

The mission behind GenOnMinistries program is to bridge the gap between generations. The Sunday prior, families were given a big ole potato and vaguely told “to go make something of it.” What’s that supposed to mean? Wide open to interpretation, don’t you think?

Fast forward: I timidly walked into the church not knowing whether I had rightly or wrongly followed directions for the potato. After all I’d used all raw elements and the instructions could have meant the tater must be in a cooked/edible form. Oh well, I thought, it’s food art! Both wanting to support the program and get my creative juices flowing, here’s my creation.

LIFT served it’s mission in giving young and old alike a delightful hour beginning with a prayer – a spin-off of the old song, we older people related to. You know, the one that begins “One potato, two potato, three potato more….” We also shared a meal together – appropriately an egg/ham/potato casserole. Afterward we took turns reading some verses.

All in good fun, the room was filled to capacity and we ended the hour by playing a fast-paced round of “hot potato,” while singing the oldie but goodie “Jesus Loves Me.”

Later that evening, before I lay me down to sleep I pondered how happy I was to have participated as I recalled what Pearl S Buck once said.

If our American way of life fails the child, it fails us all. ~Pearl S. Buck, author of The Good Earth

A Carpenter Nails It

"...change... to focus all your energy not on fighting the old, but on building the…

"Let us cross over the river and rest under the shade of trees." ~ Thomas…