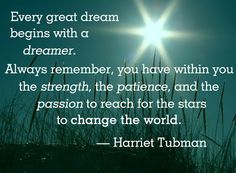 On this Memorial Day weekend, let’s explore Freedom fighter Harriet Tubman. She had a love so deep in her heart for her fellow citizen, she risked so much. Posthumously this extraordinary woman’s story of what she sowed for the future of African-American people is finally getting the attention it deserves.

Last summer, I visited the Harriet Tubman Museum in Cambridge, Maryland and grew better acquainted with this fascinating woman in our country’s history. Two months ago the Harriet Tubman Underground Railroad State Park in Maryland opened and an announcement was recently made that her portrait will soon grace the front of $20 bills.

There are some wonderful photos and other information about The Harriet Tubman Museum and a story on All Things Fulfilling. Check it out.

The Tubman tale connects the experience of many African-Americans who sought freedom, and it holds a special place of interest in our American history.

“Where the spirit does not work with the hand there is no art.” ~ Leonardo…

Everyone needs a life line. What's your saving grace? A person, place or thing? Having…

Sunday Noon in the Garden: "Bloom from Within" Decoupage Journal Cover and Photo © Sue…